Building Your Own Tools

A stronger church means recruiting and educating a new generation of priests as well as developing programs for laity that lead to lay leadership. The Stronger Truer Sewanee campaign is building resources for both of these efforts. Highlights are new financial aid resources, funding for new programs of the Beecken Programs Center, and an ambitious capital project, moving the seminary back to its historic home on Georgia Avenue. 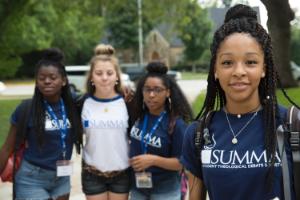 SUMMA is the brainchild of the the Reverend Christoph Keller III (father of Christoph Keller, C’08), an Episcopal priest and theologian currently serving as interim dean and rector of Trinity Cathedral in Little Rock. SUMMA offers high school students tools for reasoning and in-depth knowledge of the Christian theological tradition. Begun as a pilot project in Little Rock, the program is now expanding nationally through the Beecken Programs Center at the School of Theology.

“I think SUMMA speaks to a profound need in our society,” says Keller. “Many young people today are drifting away from the Christian faith, and I think that this is so in large part because they do not understand it. SUMMA provides an opportunity for deep exploration of faith--what it is and what it isn’t. I think it sets up a “virtuous cycle” of better understanding leading to deeper faith, which leads to greater understanding.

“So my premise in starting SUMMA is that young people will be less likely to turn away from their faith if they know more about it. We set SUMMA up as a way of testing that proposition. The participants are invited to think deeply and critically about some of the important topics of the day, looking through the lens of the Christian faith and using all the well-honed disciplines of reason. As students learn tools for thinking and they also gain practice in public speaking. And as they develop greater understanding, they are able to critically evaluate the disparaging remarks about faith to which we are more and more exposed in school and public media. Their faith is stronger. The intellect is not the only tool for building the church back, but I see SUMMA and the kind of thinking it develops as a way of rebuilding the church from the inside out.”

A highlight of each day is a theological lecture and discussion led by Keller. Keller is a superb discussion leader. He asks weighty questions and honors each response for its value in forwarding the discussion. Students rise to respond, and many voices are heard. After the lecture, the camp breaks up into discussion sections, each led by a humanities professor or by a theologian. This summer, four discussion leaders were Sewanee professors.

“I am profoundly grateful for the strong engagement from the Sewanee college faculty, including four professors from the English Department and one from the Philosophy Department,” says Keller. “As one of them said to me, it was a great treat for him to engage deeply with students on philosophical and ethical questions explicitly within the framework of a shared faith.”

Keller also sees SUMMA as an antidote to the excesses of increasingly coarse political dialogue. “Our public discourse is disheartening,” he says. “Just the very worst form of opinionated disagreement. Young people absorb bad practices from cable news, which has set a bitter and corrosive tone for our national conversation.”

By contrast, participants in SUMMA learn tools that allow them to disagree with one another respectfully. “At the end of several debates, our students hugged,” Keller reports. “One student who was judged winner objected that his opponent had made the stronger argument. Several students exchanged ideas about how each could strengthen their argument in coming rounds. These things don’t happen much on cable news.”

Keller’s deep connections in the Episcopal Church have helped him develop a truly superb program that is advanced not only by Sewanee professors but by church leaders and scholars. This year’s camp featured contributions from the former Bishop of Mississippi, the Rt. Rev. Duncan Gray, H'01. In addition, three scholars from Arkansas, the Rev. Dr. Kate Alexander (theology), Dr. Christy Marquis (classics) and the Rev. Dr. Russ Snapp, C’81, (American history), all were deeply and directly involved through the entire week, co-leading seminars, leading worship, and guiding students as they prepared for their debates. “They were a delight to work with,” says Keller, “an inspiration to the students, and a huge help.”

Keller sees the one-week camp as an entry point to a program that can span multiple years and foster debate throughout the year. “SUMMA is first a theological debate society, and over the next few years, we hope to be building a network of churches, youth ministries, and even other colleges that will foster this approach. We hope to begin raising funds that will allow us to expand the network, to create a SUMMA society with participants all across the country.

“Several of our students from outside Arkansas told me that they had been sent as ‘scouts’ from their regions, and came not knowing what to expect. They said they’d be back and bring their friends. One student (who had lost his two debates) said he was definitely coming back next year and that he had asked all the campers and they almost to a person said they were definitely returning too. They learned, they debated, and they had fun.”

Students participate in SUMMA at a reasonable cost, and the Beecken Center is also offering financial aid for those in need. Aid is made possible by a growing endowment contributed by an anonymous donor. Over the next few years, as SUMMA is being developed, organizers hope to raise other funds to build the network and ensure that anyone who wishes to be a part of the Society can do so.

Gifts to Stronger Truer Sewanee from the Lilly Endowment and from a Sewanee parent have launched this innovative program to educate tomorrow’s church leaders. Learn more about SUMMA or email summa@sewanee.edu.