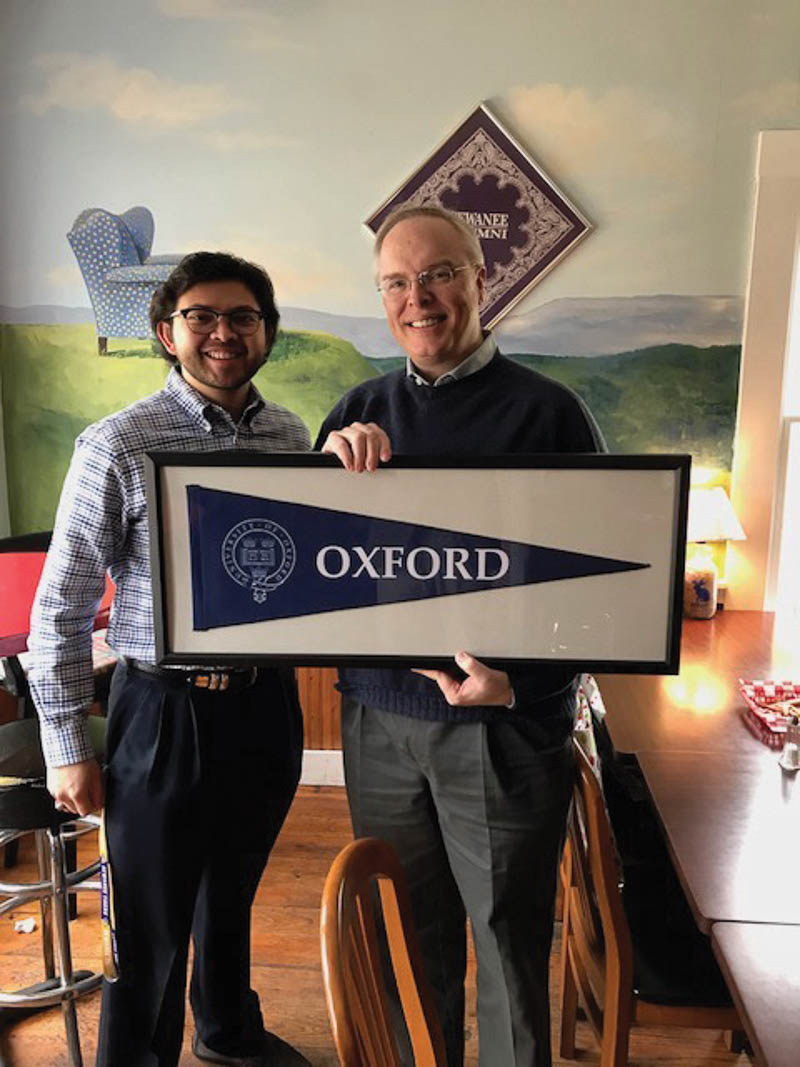 This story begins and ends with gratitude.

When Roger Glenn Sisson, C’85, was a student at Sewanee, he knew the sacrifices his rural East Tennessee parents were making to give him a Sewanee education, and he was grateful. So when the opportunity to go to Oxford through the European Studies Program came up, he kept that to himself and passed on the program. “They would likely have sacrificed to send me,” Sisson says. “But I already knew the sacrifices they were making, and I was already grateful.”

The opportunity passed, and Sisson applied himself to his classes, graduating as the 1985 valedictorian, and then to success in law school at the University of Virginia. After graduating from law school in 1988, he was offered a job at Genesco in Nashville and took it, thinking he would practice corporate law for a few years. One year led to another, and Sisson is now senior vice president and general counsel for the company. He has led the company through environmental litigation, the selling of unprofitable divisions, and helping boost the company’s retailing business.

As Sisson’s career developed, Sewanee asked him to consider a gift to the College, and he agreed. Ed Moser, C’76, was the gift officer who approached him about establishing a scholarship in honor of his parents. “That proposal was uncanny,” says Sisson. “Ed served up the idea of honoring my parents, and I couldn’t resist.”

A lifelong Anglophile, Sisson traveled often to England after college, but he never forgot his missed opportunity to study in Oxford as a college student.

So when the chance to came to make a gift to support a student in the program (presented this time by Robert Black, C’89), he was eager to do so, and established an endowment to provide a scholarship to a student who might not otherwise be able to attend. He loved the idea of helping a student with whom he could identify—someone who was excited about the opportunity to be at Oxford but who needed financial help to make it happen.

Already happy with that choice, one day he received a letter in the mail. It was a thank you letter from Jay Strickland, C’19, who had received the Sisson scholarship. “I had been receiving thank you letters from scholarship recipients for a few years, but this one was a cut above,” says Sisson. “First of all, it was written right in the middle of the experience. Jay took time out from his studies to thank me. It was long and detailed, and the thing that bowled me over was that he conveyed the sense that he was pinching himself because he couldn’t believe his great fortune. I could really relate to that.”

In the spring of 2018, Strickland and Sisson were able to meet face to face. Strickland reached out through the program’s director to make contact, and they met at the Blue Chair in Sewanee, where Strickland presented Sisson with a framed Oxford pennant. “I was moved and grateful to Jay,” says Sisson. The pennant is proudly displayed in Sisson’s home in Sewanee.

Perhaps it is gratitude that truly animates giving.

The European Studies Program has two options: one focusing on ancient Greece and Rome and one focusing on western Europe, with major study at British universities such as Oxford. The Sisson gift supports a student attending the Western Europe session, which takes place in the summer and fall each year.