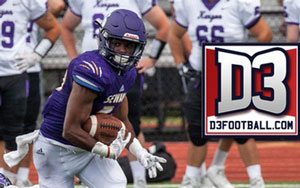 For the second time in two weeks this season, Sewanee has a football player on the national D3football.com team of the week. Kicker Michael Jacobs was named to the team after his performance with the special teams on Saturday at Washington & Lee. He went a perfect 3-for-3 on field goals, with two of them over the 40-yard mark.

Following the first week of the season, freshman defensive back William Phillips earned a spot on the team of the week at the cornerback position. Against Kenyon, Phillips scored on a 98-yard fumble recovery for a touchdown and had two interceptions.

The D3football.com team of the week is a weekly honor roll started in 1999. It recognizes the top individual performance at each position.

Sewanee student-athletes have also been named Southern Athletic Association (SAA) players of the week twice this year. Katya Waters was selected on Sept. 11 as the Field Hockey Defensive Player of the Week; she had nine saves against Earlham College last weekend.

The previous week, the SAA named Samantha Bourgeois the conference Women's Soccer Defensive Player of the Week. She recorded 18 saves in the two matches played at the Meredith Classic in North Carolina.

Visit the Sewanee Athletics website for more news about the Tigers.