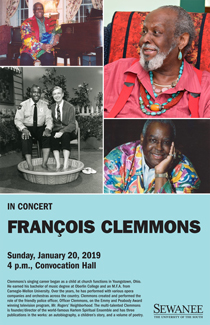 Winter Convocation will be held on campus January 18. Three events presented during the week—a film screening, a poetry reading, and a concert—will feature honorary degree recipients.

The film Won’t You Be My Neighbor?, a recent documentary about the life and guiding philosophy of Fred Rogers, will be shown at 7 p.m. Wednesday, Jan. 16, in Guerry Auditorium. Rogers was the host and creator of the Emmy and Peabody Award-winning children’s television program Mister Rogers' Neighborhood, which debuted in 1968. The screening will be followed by a conversation with François Clemmons, known for his role of Officer Clemmons, the friendly police officer on the show. The film has just been nominated for best documentary by the Directors Guild of America. It was a New York Times Critic's Pick in June; the reviewer called it a “moving and illuminating new documentary” that felt like a gift.

Clemmons, a professionally trained operatic tenor, will also present a concert at 4 p.m. Sunday, Jan. 20, in Convocation Hall. He learned traditional spirituals from his mother, who sang as she worked around the house, then played more than 70 classical and opera roles around the world as a member of the company of the Metropolitan Opera Studio. Clemmons has performed his favorite role, Sportin’ Life in Porgy and Bess, more than 200 times, earning a Grammy award for his recording of the role. He founded the Harlem Spiritual Ensemble, and performs regularly in America, Europe, and Asia. 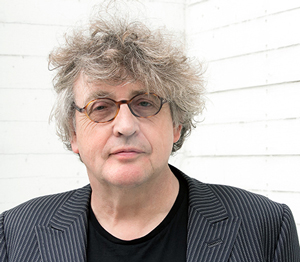 On Thursday, Jan. 17, poet and Princeton professor Paul Muldoon will give a reading at 4 p.m. in Convocation Hall. Muldoon is an acclaimed poet who has been awarded both the Pulitzer Prize for Poetry and the T.S. Eliot Prize. A former producer for the BBC in Belfast, he is the author of more than a dozen collections of poetry including Moy Sand and Gravel, for which he won the 2003 Pulitzer Prize. He has been described by The Times Literary Supplement as “the most significant English-language poet born since the second World War.” In the New York Times Book Review, Roger Rosenblatt described Paul Muldoon as “one of the great poets of the past hundred years.”