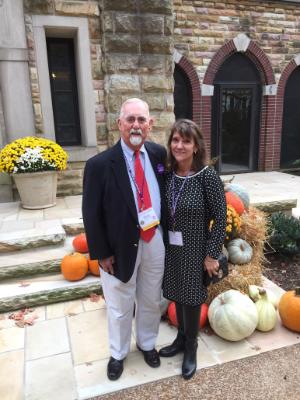 In 2007, Dick D. Briggs, Jr., C’56, P’86, P’91, and his family established a scholarship in memory of Briggs’ recently deceased wife, Susan Briggs, P’86, P’91 Scholarship. “Susan did not attend Sewanee, but she loved it,” says Briggs. “And her husband and two of her children went there, so we thought it was an appropriate memorial.”

Briggs met Susan at what he calls a traditional week long Southern wedding, where the groomsmen and bridesmaids became acquainted on dates on successive evenings leading up to the wedding. “I met Susan the first night, and I told the bride she needed to change the schedule because I had already met my true love,” he remembers. Briggs persuaded the bride to make the schedule change and ultimately persuaded Susan as well. “She said the schedule was set, and I told her, ‘Cornelia: you’re the bride; you can do whatever you want.’ So she made the change.”

Now, as a contribution in the Stronger Truer Sewanee campaign, Briggs is making new contributions to the Susan Briggs Scholarship Endowment, hoping to bring the principal to $1 million in the next several years. His funding strategy: the donation of required IRA distributions. His goal: round out this memorial before his own passing. And, because he is active and healthy, Briggs is confident he will make that goal.

At 85, Briggs is a model of fitness, keeping up with a pair of border collie puppies, playing tennis, and mowing his lawn. “I tell people I’m the only guy in my neighborhood to mow his own lawn,” says Briggs. “I only do it to keep in shape to play tennis.” In fact, Briggs plays so much tennis that he recently won a tournament only a few months after getting a knee replacement. The success landed his story on the orthopedic surgeon’s website, in a well-produced video.

Preference for the scholarship is given to prospective students from Alabama and Mississippi. “I was born in Meridian Mills, Mississippi,” he says, “but I spent most of my growing up years in Meridian, Mississippi.” Meridian was where Briggs developed his love of tennis, while he lived in York, Alabama.

“My association with Sewanee has been long and absolutely enjoyable,” says Briggs. “I think that is motivation enough to be generous.”

Briggs is pictured above with his daughter, Adrienne, C'86, who is also a medical doctor, practicing in Arizona.