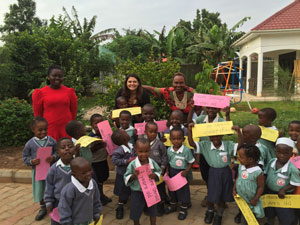 For some Sewanee students, responding to the question “What did you do this summer?” takes a bit longer to answer and brings up a host of memories of rewarding—but complicated—experiences. Fourteen Sewanee students and recent graduates ventured to Tanzania and Uganda during the summer of 2016.

Five students participated in a study tour in Uganda led by Paige Schneider (Politics) as part of a field class on gender and human rights that began during the spring semester (photo, below left: Sewanee students with students at Victoria University, Kampala, Uganda). Others took up internships in Ugandan and Tanzanian non-governmental organizations (NGOs). The organizations all focus on public health or human rights advocacy. In addition, seven Sewanee faculty members traveled to the same two countries to foster ties with St. John’s University in Dodoma, Tanzania, and the growing network of NGOs with whom Sewanee has partnered.

The swelling number of students and faculty travelling to Africa this summer is a result of a strategy developed by faculty members working with Amy Patterson (Politics), a specialist in African politics, civil society, and global health policy. The project to engage with Uganda and Tanzania grew slowly out of Patterson’s ties with organizations and individuals who work on HIV/AIDS issues. In 2013-14, Canon Gideon Byamugisha of Uganda visited Sewanee to offer a course on HIV and civil society in Africa. “Canon Gideon,” as he came to be called in Sewanee, is HIV-positive and runs a foundation and school to help young people who are infected with or vulnerable to HIV/AIDS. He worked with faculty and community members to deepen ties to his organization and offered internship opportunities to students in his foundation and school. 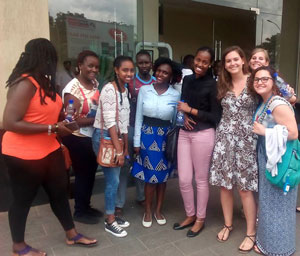 A grant from Sewanee’s McCrickard Fund in 2014 began supporting a three-year project to develop Sewanee’s ties to Uganda and Tanzania, including sending faculty to engage in collaborative research and teaching opportunities and to support student interns. The McCrickard Fund supports projects that touch many students or that generate recognition for Sewanee through the projects’ excellence. The efforts in Uganda and Tanzania are meeting both goals.

Results from the first year

The internships in Uganda and Tanzania have been eye-opening for students. In the first year of the McCrickard grant, Sewanee students Anna Alikani, Avery Kelly, Shannon Jones, and Mary Stuart Smart, all C’14, and Josie Glenn, C’15, interned at FOCAGIFO, the non-governmental organization started by Canon Gideon. At the time, the financial situation of the organization was a challenge, and everyday resources, taken for granted in the U.S., were absent. Unreliable access to electricity, computers, and the internet made early efforts to build a website and raise the capacity of the organization difficult, but the dedication of the local staff impressed the interns. Jones said, “I was deeply affected by the passion of the staff for the work they are doing and the tireless devotion and creativity Gideon Byamugisha dedicates to the organization.”

The motivation to help others has animated the work and professional studies of the 2014 cohort of interns. The former interns variously have entered graduate programs in public health or law school, worked with a nonprofit on social entrepreneurship and with AmeriCorps, and worked with an NGO doing advocacy work on human rights at the United Nations. Jones noted a lesson learned in Uganda: “I think the main thing I took away from FOCAGIFO was the importance of empowering people to believe that they can bring the change they seek, even if it is only in small incremental measures.”

Five more students served as interns at the organization in 2015, and in 2016 the internship program expanded the number of organizations in which Sewanee students worked. In addition to Canon Gideon’s foundation, the cohort of interns was placed in six other organizations, including the Carter Center, which runs a program to prevent river blindness; International Community of Women Living with HIV/AIDS in East Africa; Raising Voices, a group committed to protect women against violence; and the Kabanda Protectorate Center, which serves albino children, among others.

One of the 2016 interns, Daniela Cubillo, C’18, worked at St. Beatrice-Kamili Junior School and immersed herself in the local community (photo, top right). Sara Balte, C’17, found that her work at a school in Tanzania confirmed her interest in engaging with others to address community problems. Kate Perry and Walker Buxton, both C’17, interned in Uganda, continuing students’ work with Canon Gideon’s foundation, FOCAGIFO. They worked at the school run by the foundation and expanded the foundation’s social media presence. “This summer taught be that letting go of a personal vision of how things should work is crucial to actively participating in such an organization,” said Perry—an important lesson about what it means to be a global citizen and how to work in partnership with host communities. 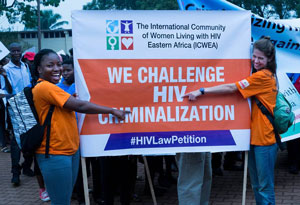 Two student-interns, Anna Sumner Noonan, C’17, and Brook Vann, C’18, worked at the International Community of Women Living with HIV/AIDS in East Africa. They helped the organization to develop its communications infrastructure and to seek funds to expand its programs. Both interns came to realize the material challenges that such NGOs face, which slow the process of work getting done.

Several Sewanee faculty members visited Tanzania and Uganda over the summer to advance ties to St. John’s University and to the NGOs with whom the University is partnering. The faculty—Ken Smith (Earth and Environmental Systems), Pradip Malde (Art), James Tengatenga (the School of Theology), Chris van de Ven (GIS), and Russell Fielding (Environmental Studies), in addition to Patterson and Schneider—held conversations with St. John’s faculty and administrators about ways to collaborate in the future.

Other faculty members traveled to Uganda and Tanzania during previous summers—Katherine Theyson (Economics), Michael Wairungu (Swahili), and Mila Dragojevic (Politics). Some of the research conducted in the region has been published in journal articles and included in book projects. Additional academic research projects on environmental sustainability, community development, public health, and good governance are in the works.

The recent numerous projects and activities in Uganda and Tanzania are deepening Sewanee’s engagement with East Africa. The efforts are culminating in closer ties with St. John’s University in Tanzania and ongoing internships with Canon Gideon’s foundation and other nongovernmental organizations. Such work is having a positive impact on citizens in Uganda and Tanzania, as well as profoundly affecting Sewanee’s student and faculty participants. As one 2016 intern to Uganda said, “It was life-changing.”