Talk by Wendy Davis: Remembering Roe: Where do we go from here? 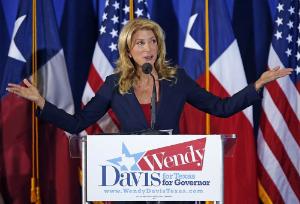 As the anniversary of Roe v. Wade approaches, the Women's Center commemorates the historic decision that affected so many women and seeks to continue discussion around the intersectional approach to reproductive rights in order to maintain and further enshrine our rights to our bodies. Former Texas state senator and 2014 gubernatorial candidate Wendy Davis will share her experience as an advocate for choice and share her thoughts about the future. All are invited to her talk, part of the Women's Center series for the Roe v. Wade Anniversary Commemoration.

Davis rose to fame in 2013 when she took the Texas Senate floor and began a filibuster of Senate Bill 5, an abortion restriction bill. After more than 10 hours, the bill was successfully delayed. (It passed in another session, only to be struck down in 2016 by the Supreme Court.) Davis represented the 10th District in the Texas Senate, serving Fort Worth and a portion of Tarrant County. She ran for governor in 2014 against Greg Abbott.

Davis attended community college, and graduated from TCU and Harvard Law School. She received recognition during her first term in the Texas Legislature, including the "Bold Woman Award" from Girls, Inc., "Freshman of the Year" from AARP, "Champion for Children Award" from the Equity Center, and "Texas Women's Health Champion Award" from the Texas Association of OB-GYNs.

The talk is free and open to the public. Sponsored by the Women's Center, University Lectures Committee, Women's and Gender Studies, the Departments of History and Politics, Sewanee Democrats, and the Dean of the College.