“The Future of Diplomacy and World Geopolitics” with Ambassador Thomas Shannon 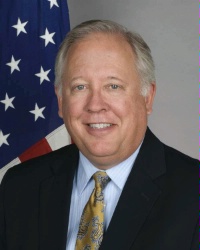 The U.S. Department of State’s Under Secretary for Political Affairs, Thomas A. Shannon Jr., will speak on “The Future of Diplomacy and World Geopolitics” at 4:30 p.m. Thursday, Oct. 20, in Gailor Auditorium.

Shannon is the State Department's fourth-ranking official. The under secretary serves as the day-to-day manager of overall regional and bilateral policy issues, and oversees the bureaus for Africa, East Asia and the Pacific, Europe and Eurasia, the Near East, South and Central Asia, the Western Hemisphere, and International Organizations. Shannon and the regional assistant secretaries work closely with U.S. embassies and consulates overseas and with foreign embassies in Washington, DC.

Thomas A. Shannon Jr. was confirmed as Under Secretary of State for Political Affairs on February 12, 2016. Previously Shannon served as Counselor of the Department; he was only the seventh Foreign Service officer to hold the position of Counselor since World War II, and the first in 32 years. He served as U.S. Ambassador to Brazil for nearly four years. Prior to his tenure in Brazil, Shannon served as Assistant Secretary of State for Western Hemisphere Affairs (2005-2009); Special Assistant to the President and Senior Director for Western Hemisphere Affairs at the National Security Council; Deputy Assistant Secretary of Western Hemisphere Affairs at the State Department; and U.S. Deputy Permanent Representative to the Organization of American States.

During his 30-year career as a Foreign Service officer, Shannon also served in Caracas, Venezuela; Johannesburg, South Africa; Brasilia, Brazil; and Guatemala City, Guatemala. He graduated with high honors from the College of William and Mary, then studied at Oxford University, where he received both an M. Phil. in Politics and a D.Phil. in Politics. He speaks Spanish and Portuguese.

While on campus, Shannon is expected to have several meals with faculty and students who are interested in Latin American issues, global trends, and foreign service careers.

Shannon’s lecture is sponsored by the IGS, Politics, and Spanish departments and funded by the University Lectures Committee.