"The Idols of ISIS," a talk by Aaron Tugendhaft 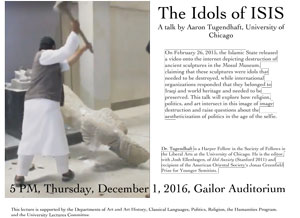 On February 26, 2015, the Islamic State released a video onto the internet depicting destruction of ancient sculptures in the Mosul Museum, claiming that these sculptures were idols that needed to be destroyed, while international organizations responded that they belonged to Iraqi and world heritage and needed to be preserved. This talk by Aaron Tugendhaft will explore how religion, politics, and art intersect in this image of image destruction and raise questions about the aestheticization of politics in the age of the selfie.

Aaron Tugendhaft is a Harper Fellow in the Society of Fellows in the Liberal Arts at the University of Chicago. He is the editor, with Josh Ellenbogen, of Idol Anxiety (Stanford 2011) and recipient of the American Oriental Society's Jonas Greenfield Prize for Younger Semitists.

This lecture is supported by the Departments of Art and Art History, Classical Languages, Politics, Religion, the Humanities Program, and the University Lectures Committee.