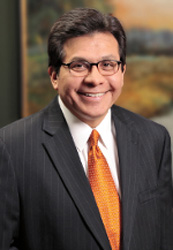 Former U.S. Attorney General Alberto Gonzales will speak at Sewanee Thursday, Feb. 26. The talk, “Public Service during Historic Times,” will be at 4:30 p.m. in Convocation Hall. Gonzales will sign copies of his newly published book, A Conservative and Compassionate Approach to Immigration Reform, at 4 p.m. in Convocation Hall. Students, faculty, and members of the community are invited to attend.

Gonzales is the dean and Doyle Rogers Distinguished Professor of Law at Belmont University School of Law. He joined Belmont Law in 2012 and was appointed dean in 2014. He has taught courses there in Constitutional Law, Separation of Powers, National Security Law, and First Amendment Law.

From 2005-2007, Gonzales served as head of the Department of Justice under President George W. Bush. He had previously worked as a partner at a major Houston law firm and held positions as Texas Supreme Court Justice, Texas Secretary of State, General Counsel to then-Governor of Texas George W. Bush, and Counsel to the President of the United States.

Gonzales is an appointee of Tennessee Governor Bill Haslam to the Governor’s Commission for Judicial Appointments and the Governor’s Management Fellows Executive Committee. He is a graduate of Rice University and Harvard Law School.

While on campus, Gonzales will meet with pre-law students and visit Associate Professor of Politics Andrea Hatcher’s course on the presidency.