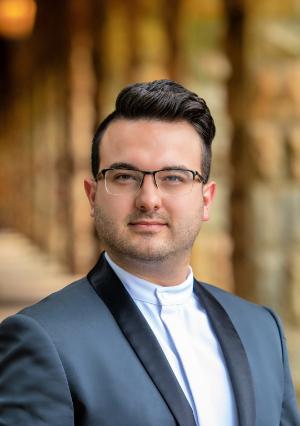 California-born musician Mathew Ward is the current Artistic Director of the Sewanee Symphony Orchestra at the University of the South in Tennessee where he champions new approaches to programming and audience engagement. As the founding Music Director of the Baton Rouge Civic Orchestra, Mathew set the tone of the organization, fostering community-building through the arts, establishing partnerships with organizations throughout the capital city, and programming innovative, relevant music to speak to local audiences. Ward has also had the pleasure of conducting the Sewanee Summer Music Festival New Music Ensemble, the Louisiana State University Symphony Orchestra and LSU Philharmonia.

As a teaching artist, Mathew is devoted to reaching out to new audiences and finding new ways to engage people of all backgrounds. In Baton Rouge, Mathew worked with the regional arts council and other community organizations to bring chamber music programming to schools, community centers, and public housing. He was a member of LeMieux Studios, a collective of classical musicians offering immersive, contemporary classical performances alongside visual art installations, live painting, interactive creations, and more. While living and working in Boston, Mathew worked with the Longy School of Music’s El Sistema-inspired nucleos, a program providing free music education and orchestral experience to local students, and served as a mentor for the National Take a Stand Festival with the Los Angeles Philharmonic in 2016.

As a violinist, Mathew’s time in Boston was spent performing with organizations such as Boston Civic Symphony, Boston Opera Collaborative, the award winning ensemble New England Repertory Orchestra, and was a studio musician with SoundtRec Symphony Orchestra at WGBH Boston. In the south, he had the pleasure of playing in orchestras like the Louisiana Philharmonic, Opera Louisiane, Gulf Coast Symphony, Acadiana Symphony, Lake Charles Symphony, and others. A native Californian, Mathew is also a former member of San Diego City Ballet  Symphony,  Moonlight Stage Productions, and San Diego Musical Theatre.  In 2010 he was the recipient of the Alan Lee Memorial Scholarship and Concerto Competition Winner with the La Primavera Symphony. Mathew also toured with La Primavera throughout Italy as concertmaster, and participated in the Australian International Music Festival, where the orchestra clenched a silver medal with a performance in the Sydney Opera House.

Mathew is currently a doctoral candidate at Louisiana State University in 2020, where he studied with Venezuelan conductor Carlos Riazuelo. He holds a Master of Music and Undergraduate Diploma in violin performance as well as a Teaching Artist certificate from the Longy School of Music of Bard College in Cambridge, Massachusetts, where he studied with violinist Jesse Mills and conductor Dr. Sean Wang.

Driven by a dynamic background and his vision of the future of classical music, Mathew Ward combines his performing experience, teaching artistry, and passion for collaboration to create meaningful experiences for the modern audience and performer alike.