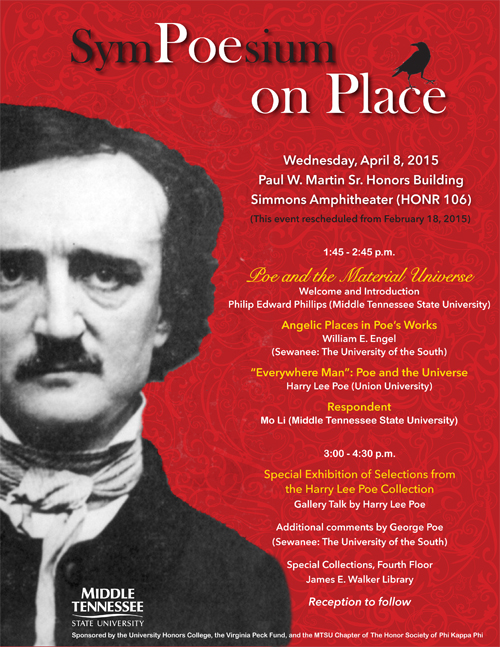 A symposium on "Poe and Place" (dubbed by the program organizer, Philip Phillips, as a "SymPOEsium on Place") took place at Middle Tennessee State University on April 8.  Sewanee's Bill Engel read a well-received paper on "Angelic Places in Poe's Works" and Dr. George Poe's cousin, Hal Poe of Union University (who gave a Friends of the Library address here in 2009 during the bicentennial year of Poe's birth) spoke on "Poe and the Universe," followed by a Q&A session moderated by Mo Li of China who is completing a doctoral dissertation on Edgar Allen Poe under the directorship of Philip Phillips, Professor of English and Associate Dean of MTSU's Honors College ... and organizer of the colloquium and present President of the Poe Studies Association, with Bill Engel serving on the Executive Committee. The second session was held in MTSU's Special Collections Gallery of the Walker Library, where Hal and George Poe discussed items from their own personal collections and where Dr. George Poe talked about the French poets, Charles Baudelaire and Stéphane Mallarmé, and their translations of Edgar Allen Poe's works into French.