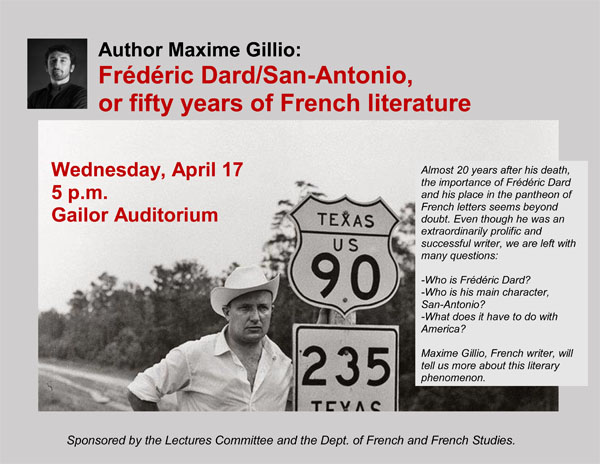 French author, Maxime Gillio, will be on campus to give a lecture entitled "Frédéric Dard/San-Antonio, or Fifty Years of French Literature" on Wednesday, April 17 at 5 p.m. in Gailor Auditorium.

Almost twenty years after his death, the importance of Frédéric Dard and his place in the pantheon of French letters seems beyond doubt: with nearly three hundred novels, twenty plays, thirty screenplays, hundreds of short stories and articles, and 220 million books sold, his stature has to be recognized as that of an essential patrimonial author in the French literary field. The paradox of such literary notoriety and public recognition is that they are in a large measure indebted to the character of San-Antonio, a police detective seen by his author as an ephemeral potboiler who was to last only until his other literary endeavours brought him success.  The ephemeral series lasted for fifty-two years, until the death of the author, and none of his other literary output achieved the same level of impact. Throughout his career, Frédéric Dard was unable to escape his alter ego, San-Antonio, the fictional detective-memorialist. San-Antonio, who Dard came to see in turn as a source of income, as an outlet to vent his auctorial frustration, as a puppet escaping its creator, as a goose that lays the golden eggs, ended up becoming the guarantor of his literary ambitions. Over five decades of uneasy cohabitation between the author and his double, Frédéric Dard increasingly came to assume the identity of the textual doppelgaenger however much he at times loathed him. The style and cultural references made in the series owe much to this productive tension, and it is on this that Frédéric Dard’s reputation thrived. The Sewanee conference proposes to explore instances of tension and duality throughout the works of Frédéric Dard/San-Antonio, and their various media (novels, drama, film, stories, journalism…) and to assess his cultural and literary legacy.