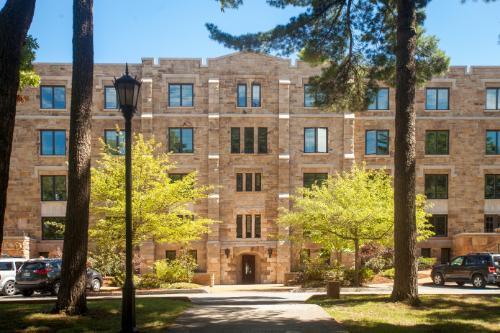 Thirty-two of the singles are arranged in suites of four rooms which share their own central common room. The common rooms of these suites are furnished with a couch or chairs and a padded window seat. Suites have their own restrooms. Residents living on the third through fifth floors share hall restrooms. Students on the second floor share a restroom, located between every two student rooms. All rooms are carpeted and windows are furnished with blinds.

Room Furnishings (based on a double occupancy room):

The first floor has a large kitchen with dining room, a study room, a parlor with fireplace, a laundry room, an exercise/TV room, and an indoor bicycle room. There are large TV lounges located at both ends of the second floor. Quintard also contains an elevator. Quintard Hall is air-conditioned. It also has a back patio with a grill.