With support from the Sewanee rhetoric program and the Office of Undergraduate Research, four Sewanee students presented rhetorical criticism papers at the Theodore Clevenger Undergraduate Honors Conference in Montgomery, Alabama in early April. The Clevenger conference, one of the oldest and most prestigious undergraduate research forums in the field of rhetoric, attracts students from as far away as the University of Puget Sound and Florida Atlantic University and nearly everywhere in between. All papers are competitively selected for presentation. This year’s Sewanee contributions emerged from research projects in RHET 312 U.S. Public Address II: 1865-Present (Easter 2018) and RHET 331: Voices of American Women (Advent 2019). Both courses survey American rhetoric and oratory of the period, and each paper offered a close reading of a speech or rhetorical controversy in its historical context.

Before the conference, each student revised her paper significantly and participated in a group practice session to prepare for presenting research in a conference setting and fielding audience questions. Center for Speaking & Listening tutors William Merriman and Cole Porter, who both presented papers at last year’s Clevenger conference, were on hand to offer suggestions and feedback. At last year’s conference, Merriman won the Franklin Shirley Prize for Best Student Paper.

Summer Menefee (’19, pictured below) found the rehearsal to be very beneficial and “enjoyed watching all the other Sewanee students prepare.” At the conference, Menefee presented “Lifting the Shroud of Silence: A Rhetorical Analysis of Mary Fisher’s ‘A Whisper of AIDS’” to a packed audience. The panel respondent, Dr. Nina Jo Moore (Appalachian State University), remarked in her comments that Menefee’s analysis moved her to think of Fisher’s 1992 speech in new ways and with a sense of urgency. 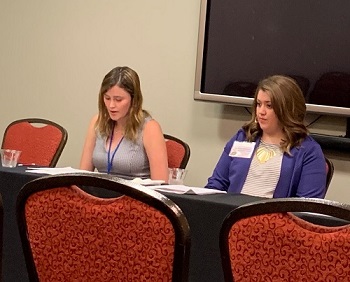 Julia van der Horst presented her paper “Visibly Human: iO Tillet Wright’s Rhetoric of Identification” on the panel “Crossroads of Change in Gender Communication.” To analyze this 2013 TED Talk, van der Horst explored how Wright developed a confrontational style of rhetoric that drew on aspects of identification. Dr. April Chatham-Carpenter from the University of Arkansas at Little Rock served as the panel respondent and expressed how impressed she was with van der Horst’s deft engagement of complex rhetorical theories in her analysis.

With papers that emerged from different rhetoric courses, Margaret Dupree (’19) and Mallory Anne Sheehan (’19) presented their respective papers “A Masculine, Feminist, and Feminine Concession: Hillary Clinton’s Last 2016 Presidential Speech” and “Ode to the Glass Ceiling: Analyzing the Historical Significance and Rhetorical Implications of Hillary Clinton’s 2016 Presidential Concession Speech.” Of note, Dupree was selected as a “Clevenger Scholar,” which means her paper scored in the top 10% of all submissions. Dr. Patrick Wheaton (Georgia Southern University), the panel’s respondent, noted that the papers offered divergent close readings of Clinton’s 2016 concession speech, its genre, reception, and legacy. Sheehan summed up her conference experience quite well: “It was a unique opportunity to put the Sewanee curriculum into practice by combining writing, speaking, and listening. I particularly enjoyed the opportunity to receive feedback from my readers and panel respondent, as our conversation left me with thoughts on how I could bolster my research.”

Professors Sean O’Rourke (Rhetoric & American Studies) and Melody Lehn (Rhetoric and Women’s & Gender Studies), both with the Center for Speaking & Listening, accompanied the students to Montgomery. O’Rourke participated on a Vice President’s Spotlight Panel entitled “Navigating Classroom Discussions and Projects on Conflict and the Crossroads of Change,” which featured Pulitzer Prize winning-author Hank Klibanoff. O’Rourke and Lehn also led discussion on a panel about starting and sustaining Speaking Centers with colleagues from Arkansas State University, Davidson College, and the University of South Carolina-Beaufort.