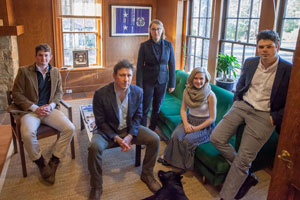 On January 31, 2017, the Sewanee Review—which was established in 1892 and is America’s longest-running literary quarterly—will publish the first issue under new editor Adam Ross on its newly designed website, at its new address, www.thesewaneereview.com. The redesigned print version will appear in mid-February. Among the familiar mix of short fiction, poetry, and essays, readers will find new features along with fresh and varied voices from both the national and international literary scene.

Ross was appointed editor in February to succeed George Core, who retired earlier this year after a record-breaking 43 years at the Review’s helm. Ross is an author whose nonfiction has been published in the New York Times Book Review, Slate, The Daily Beast, and the Wall Street Journal.  His novel Mr. Peanut, a 2010 New York Times Notable Book, was named one of the best books of the year by the New Yorker, the Philadelphia Inquirer, the New Republic, and the Economist. His story collection, Ladies and Gentlemen, was included in Kirkus Reviews Best Books of 2011.

The January issue will include John Jeremiah Sullivan, C’97, on the first blues song ever written; Lauren Groff with an essay about her sister’s tragic triathlon at the Rio Olympics; poetry by MacArthur Fellow A.E. Stallings; and Jon Meacham, C’91, with companion pieces about Hillary Clinton and Donald Trump just in time for the inauguration. The Review is proud to debut interviews with major writers as well as its new series of Craft Lectures, which will be a recurring feature in each issue. The first is by Mary Jo Salter, on poet Mark Strand.

Subscriptions will be available at www.thesewaneereview.com and include both print and electronic versions. The latter may be read on all electronic devices.

New authors will regularly appear alongside these recognized names, with two authors making their publishing debut in Ross’s first issue.

“I’m as excited about our first-time authors as the established writers who’ve come on board,” said Ross. “It’s an amazing time in American letters, with such a wide array of literary talent out there; the Review will hope to reflect this breadth.”

The new voices inside the Review will enjoy a refurbished home. Legendary book designer Peter Mendelsund and the highly-touted Oliver Munday, both of whose work was recognized in the New York Times Best Book Covers of 2016, oversaw the quarterly’s first redesign since 1944.

The enhanced University connections at the Review extend beyond the contributors. In addition to Ross, the staff this year consists of Robert Walker, C’15; Lily Davenport, C’16; Alec Hill, C’16; and Ansley McDurmon, C’16.

The Review will publish its 500th issue in the fall of 2017. “Over the decades, many of the 20th century’s greatest literary artists and critics have written for the Sewanee Review,” said Hill. “So it can feel as if we’ve always been an ‘institution,’ as T.S. Eliot labeled us in 1952. But before we were old and established, we were young and energetic. In the issues to come, we will be again.”

With all the changes, however, some things will remain. Says Ross: “Literature, in both theory and practice, remains a religion here in Sewanee.”