Sewanee celebrated Founders’ Day Oct. 6 with the traditional Convocation and the induction of 275 new members into the Order of the Gown. Four honorary degrees were awarded by the University, and Ivan Oransky, physician and founder of Retraction Watch, delivered the Founders’ Day Address. Members of Sewanee’s Board of Trustees were honored guests at the Convocation, which opened Sewanee’s 2017 Family Weekend.

Academic awards and prizes were announced by Provost Nancy Berner (see the list here). Berner also announced the appointment of a distinguished chair: the Class of 1961 Chair of the College is Professor of Philosophy and Director of Civic Engagement Jim Peterman. 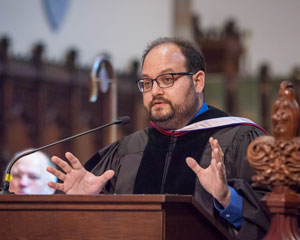 Ivan Oransky, M.D., is a Distinguished Writer in Residence at New York University’s Arthur Carter Journalism Institute, co-founder of Retraction Watch, and editor-at-large of medical news service MedPage Today. Oransky and Adam Marcus founded Retraction Watch in 2010. The site chronicles the continuing rise in scientific retractions and has been cited often in scientific literature as a source for better understanding of the true reasons for retraction.

In his address, Oransky congratulated the students on their accomplishments but reminded them not to rest on their laurels. Their mission, he said, is “calling out b.s.,” which the “world surrounding us is awash in.” Oransky has used his work with Retraction Watch to study and explain how things go wrong in science. He gave several examples of notable retractions—“the nuclear option in correction”—of scientific papers.

He broadened the topic to relate the concerns of questionable peer review and manufactured data to the world beyond science. We are learning every day, he said, how our public discourse has been “gamed by fake news.” He left the audience with two quotes to help navigate a world of unreliable information. The first is the journalistic axiom, "If your mother says she loves you, check it out." The second is from physicist Richard Feynman: “The first principle is that you must not fool yourself and you are the easiest person to fool.”

Following the address, Hadley Montgomery, president of the Order of the Gown, announced the names of new members as each stood to be recognized before being admitted to the Order by Vice-Chancellor John McCardell. McCardell reminded the new members of the privileges and responsibilities of the Order of the Gown, then said “Please accept your gowns,” beginning a happy commotion of gowning and applause. Many family members were in attendance to celebrate the achievement, and an overflow crowd watched the service from Guerry Auditorium.

The Convocation began with the sound of the Bentley Bells in Breslin Tower, and concluded with the bells of the Leonidas Polk Memorial Carillon following the singing of the Alma Mater and the university hymn.

See photos from the weekend here.