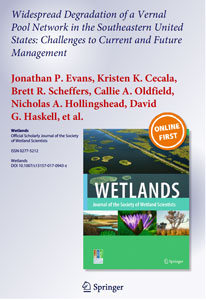 Some of the most important wetlands in the southeastern U.S. have experienced decades of degradation and now face an uncertain future. In a new study published in the journal Wetlands, ecologists at the University of the South show how an extensive network of small forested wetlands on the Cumberland Plateau in Tennessee, Alabama, and Georgia are being threatened by loss of forest habitat.

These wetlands, called vernal pools, act as distinct aquatic “islands” of biodiversity scattered across the region’s uplands. The wetlands are irreplaceable habitat for amphibians, birds, and rare plants. Amphibians such as salamanders depend on these pools to breed. Migrant birds use the wetlands as feeding stations to fuel their journeys. Rare plants live nowhere but the wet soils around the pools. When development or logging removes forest from around the pools, this biodiversity declines and disappears. Vernal pools are therefore considered vital “hotspots” of biodiversity.

Lead researcher Jon Evans and his colleagues used a computer analysis of aerial photographs to map almost 2,400 pools in the three-state study area. The authors found that only 7 percent of these pools were located on protected lands such as state parks. Forest cover around the pools steadily dropped between 1981 and 2010: the number of fully forested pools declined by more than one third, and the number of pools that had little or no forest around them increased by nearly four times.

“These tear-drop shaped pools are a vital part of the rich, natural tapestry of the Cumberland Plateau landscape,” Evans says. “Hopefully, our study will now generate awareness of their existence and provide a scientific basis to guide their conservation in the future.”

“This research helps to fill an important gap in our understanding of isolated wetlands at a critical juncture for the Clean Water Act,” said Brett Hartl, government affairs director at the Center for Biological Diversity. “Right now, the EPA is developing policies to decide which wetlands should receive federal protections, and this research shows just how vital these wetlands are, both to biodiversity and to the maintenance of water quality in this region.”

“The study directly supports the state’s mission to prevent the degradation of its diverse wetlands,” stated Caitlin Elam, environmental scientist with the Tennessee Department of Environment and Conservation. “It allows a more thorough understanding of the current threats to vernal pool wetlands, and it facilitates the location and identification of these valuable wetland resources, resulting in more protective land-use planning and regulatory oversight for these unique waters, before they are lost.”