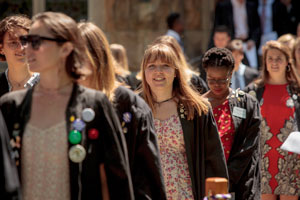 The University of the South holds three ceremonies to mark commencement weekend on the Mountain.  A Convocation for the Conferring of Degrees was held in All Saints’ Chapel on Friday, May 11, to graduate 29 seminarians from the School of Theology with a variety of degrees and honors. Honorary degrees were presented to Episcopal priest, author, and historian of American religion Randall Balmer; the Rt. Rev. David Mitchell Reed, bishop of the Diocese of West Texas; and Richard Heitzenrater, the William Kellon Quick Professor Emeritus of Church History and Wesley Studies at Duke Divinity School.

Balmer gave the commencement address and detailed three ways in which the tradition of the Episcopal Church makes Episcopalians counter-cultural Christians: justice, that lives at the center of the Anglican tradition; resisting rationalization, by not sacrificing real presence on the altar of rationalization; and true beauty, that which elevates the spirit in art, liturgy, and music. Read about the joyous two-hour service and the graduates here.

The second of three weekend ceremonies began in warm sunshine Saturday morning, May 12, as the members of the class of 2018 followed the University faculty—and valedictorian Paige Elizabeth Klump and salutatorian Zsanett Péter—into the Baccalaureate Service in All Saints’ Chapel. Overflow seating and large screens in the Quad accommodated family and community members after the Chapel was filled.

Three honorary degrees were presented during the service, to Jamaican journalist, playwright, and director Barbara Joy Gloudon; David Lodge, C’79, Rhodes Scholar and now the Francis J. DiSalvo Director of Cornell University’s Atkinson Center for a Sustainable Future; and Condoleezza Rice, U.S. Secretary of State from 2005 to 2009 and a professor at Stanford University. More information about each recipient is here. 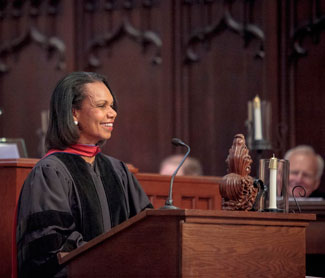 Rice delivered the Baccalaureate address, recognizing Sewanee as a place where faith and reason are companions, and speaking of the transformative power of education to unlock every person’s God-given potential. She shared several personal anecdotes to illustrate her theme that the privilege of an education confers certain obligations on its recipient. Rice told the story of her grandfather, a sharecropper’s son who “knew that education was going to allow him to become someone that he would otherwise never have been, and he knew that he would pass that on” to future generations.

She asked the graduates to remember five responsibilities they carry: to pursue their life’s work with passion; to use their powers of reason and buttress them with faith; to cultivate humility; to remain optimistic; and to serve others. She revealed her own struggle to find her passion, trying and discarding various majors in college before falling in love with international studies: “Don’t let anyone define your passion for you, because of your gender, or the color of your skin, or the background from which you come.”

And she asked the graduates to constantly examine and challenge their own opinions with the force of reason, as unsettling as that may be. “Those times when you think you’re absolutely right,” she said, “go and find someone who disagrees.” Rice spoke of growing up in the segregated South, and reminded the audience that progress comes from the concerted efforts of visionaries and optimists and idealists.

She concluded by asking the graduates to affirm that “as you leave this place, you will always remember why you came.” Her address received a standing ovation from the students and families in the Chapel. (See brief selections from Rice's address.)

Following Baccalaureate was the initiation into Phi Beta Kappa of 19 members of the Class of 2018. Twenty-two members of the class had been elected earlier in the academic year.

See photos from the weekend here (updated each day).