Sewanee students presented the research results of their 2014 summer internships at a July 25 poster session on the Yale campus.  Each student worked under the dedicated Mentsor-ship of one or more professionals.  During the preceding eight weeks the students also gathered several times each week in discussion sessions that included interns from other colleges. 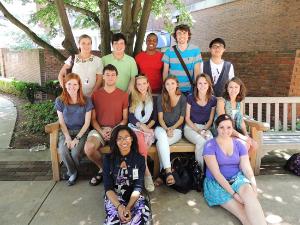 For more than 15 years now, select Sewanee students have had the opportunity to spend 8 weeks as summer research interns at the Yale Child Study Center and Yale School of Medicine.  And so it was that in early June, fifteen Sewanee students made their way to New Haven:

During their time at Yale, these students worked on research projects under the mentorship of dedicated Yale faculty with shared interests. Projects spanned many areas, as is evident from the list of poster titles below. The Sewanee cohort gathered several times each week along with summer interns from other institutions.

Linda Mayes, M.D., Sewanee class of 1973, offered a summer internship at the Yale Child Study Center to one Sewanee student in 1996.  While after almost two decades the program is still organized by Dr. Mayes and virtually all mentors have some affiliation with The Child Study Center, many of the 2014 research professionals have ties with other entities:

These summer internships are solely experiential, no academic credit;  those participating in 2013, 2012, and 2011.  The more intensive (a contiguous semester in addition to the summer at Yale) Sewanee-At-Yale Directed Research Program carries a full semester of academic credit.