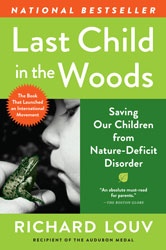 Author Richard Louv, who coined the term "nature-deficit disorder" and wrote the groundbreaking book Last Child in the Woods,will be featured at a panel discussion of his work: “Connecting Children to Nature,” at 2 p.m. Friday, April 10, in Blackman Auditorium.

The panel discussion with Louv will be preceded in the morning by a series of six seminars on environmental education. Sewanee faculty, staff, and students are welcome to attend these seminars, but seating is limited and online registration (free) is required: http://richard-louv-at-sewanee.eventbrite.com/.

Richard Louv, who often addresses national and international gatherings, delivered the keynote at the national conference of the American Academy of Pediatrics, and in 2012 was keynote speaker at the first White House Summit on Environmental Education. In 2008 he received the Audubon Medal, whose past recipients include Rachel Carson, E.O. Wilson, and Jimmy Carter.

‌He has written for The New York Times, The Washington Post, and the Times of London and appears frequently on national radio and television programs, including the Today Show, CBS Evening News, and NPR's Fresh Air. In his most recent book, The Nature Principle: Reconnecting with Life in a Virtual Age, Louv extends to adults his argument about the importance of connecting to nature.

These events are cosponsored by the Tennessee State Parks Service, as well as the following programs at the University of the South: the Collaborative for Southern Appalachian and Place-based Studies, the Education Department, the Office of Community Engagement, and the Office of Environmental Stewardship and Sustainability.

Special thanks to the University’s "How, then, Shall We Live?” lecture series, whose generous support of and commitment to community conversations is acknowledged, and to the Friends of South Cumberland, whose leadership made this event possible.

Louv will also speak Saturday, April 11, at Trails and Trilliums, an annual event of the Friends of South Cumberland.