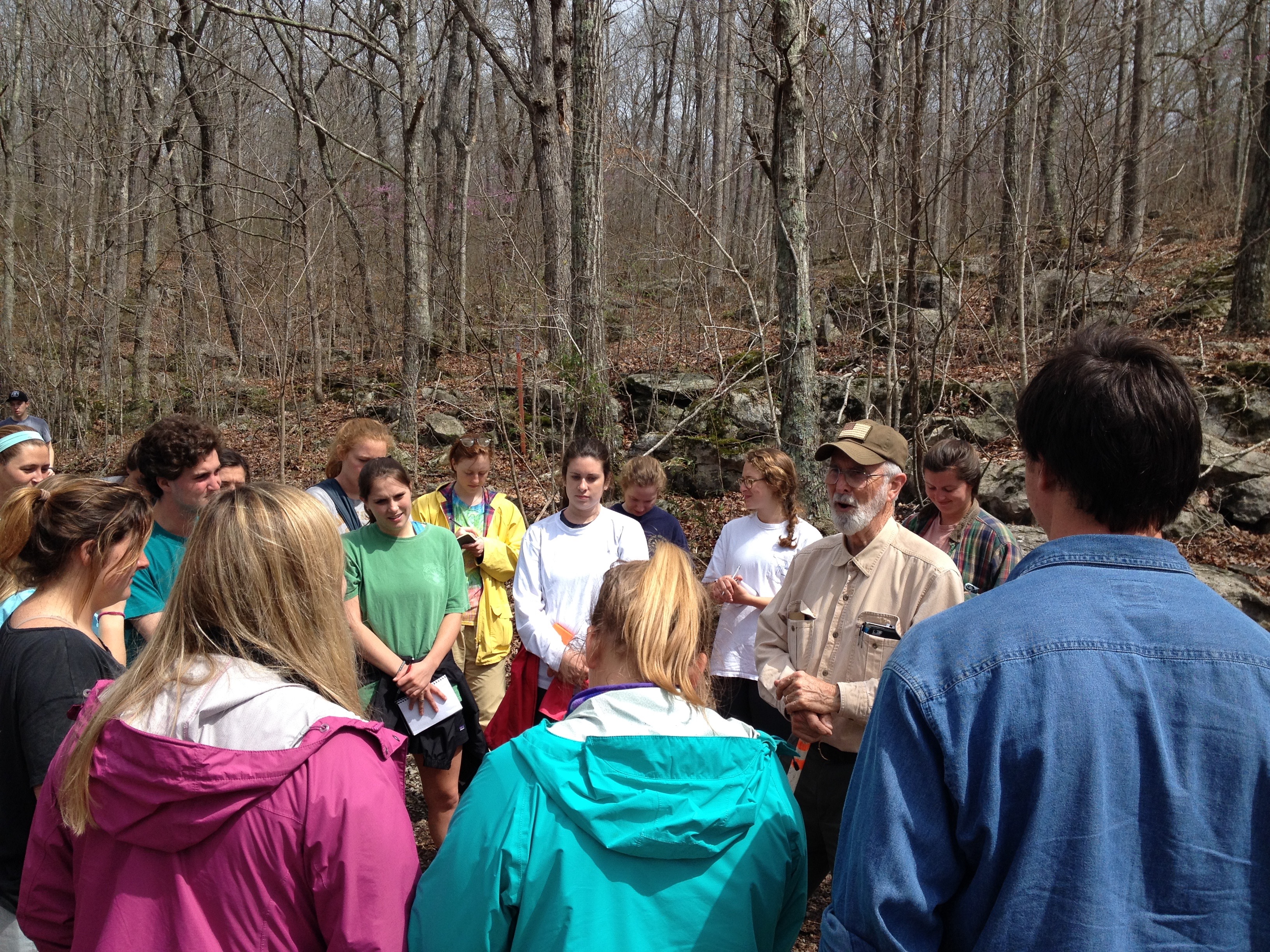 On Wednesday, April 1, Psyc 230 students heard from Professor of Religion Jerry Smith about Appalachian Religion and Culture. On Thursday, April 2, they joined Professor Smith's Religion and Ecology class on a field trip to nearby sites in and around Sherwood, TN.

Gerald L. Smith studied religion and philosophy of science at Duke University where he received his B.D. and Ph.D. He was an undergraduate [English] at the University of Richmond.

He was one of the founders of the Sewanee Outing Program and has been active in hiking, caving, climbing, and other wilderness activities. Part of Sewanee’s first environmental seminar and steering committee for the original Earth Day, Prof. Smith has taught environmental concepts to many students. A specialist in southern religion and settlement history, Smith now teaches field courses in religion that examine how religion affects landuse and how environmental abuse mirrors social values. He also teaches courses on cults and new religions.

As a naturalist and outdoorsman, he continues to hike, hunt and flyfish. He serves as a hunter safety instructor and as a nature guide in the public schools. His fishing and hunting essays have appeared in many outdoor publications.

Since 1998, Smith has been doing primary field research on the cemeteries of Middle Tennessee, visiting dozens of cemeteries each year. In 1999 he and Columbia, Tennessee, student Lonsdale Green co-authored a paper presented in London on the “Stone Burial Monuments of Middle Tennessee.” Smith has been particularly interested in discovering and describing Tennessee’s long-abandoned (and overgrown) cemeteries. He trains his students in basic field techniques such as mapping, use of GPS devices, digital photography, stone recognition, and tree identification to understand the way cemeteries mature and then decay over a century or more.

His program on “Sacred Suburbs” [cemeteries near towns] has been given or requested by a number of Tennessee towns. Smith has also lectured on cemeteries for the Friends of the Library of the University of the South, for the Sewanee Summer Seminar, and for the Franklin County Historical Society. He has developed a middle-school lesson plan for an interdisciplinary approach for teams of teachers to use in teaching school children about local cemeteries. He has used his cemetery skills in advising local authorities in managing cemeteries on public lands or in proposed highway right-of-way corridors.

He is currently working on A Historical Atlas of Sewanee. Smith contributed several articles to the Encyclopedia of Appalachia. His hobbies include antique tool restoration, flyfishing, and photography.