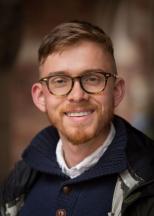 Max Fraser, Ph.D. Candidate in American History at Yale University, will speak on "Hillbilly Revanche: Trump and Sanders in Southern Appalachia" on Thursday, September 22nd at 7 PM in the Torian Room of duPont Library. The lecture is sponsored by the University's Collaborative for Southern Appalachian Studies.
In his talk, Fraser looks at the extraordinary 2016 political season from the perspective of Southern Appalachia, where two outsider candidates have had remarkable success tapping into the political disaffection of white working class constituencies across the region. Providing context that has been lacking from much of the media coverage of the presidential campaigns, Fraser examines the deep roots of that political disaffection in the historical figure of the "hillbilly", America's perennially maladjusted and problematic white poor. Turning to the present, he argues that the "hillbilly revanche" of 2016 is no passing phenomenon, and that the unrest and resentment roiling through Southern Appalachia should make it one of the more politically tempestuous regions in the country for years to come.
Max Fraser is completing a Ph.D. in American history at Yale University. He previously worked as a journalist covering politics and the economy for The Nation and other magazines. His dissertation, “The Hillbilly Highway: A Social History of Transappalachia, 1918-1974” traces the inter-regional connections between the rural south and the industrial Midwest, and examines the roots of the conservative turn of the postwar white working class. Fraser has presented his dissertation research at numerous conferences and public fora, including the 2016 Graduate Conference of the American Political History Institute at Boston University, where he was awarded the “Outstanding Paper” prize. Buildling on his dissertation research, Fraser is developing a permanent, publicly-accessible, multi-purpose archival repository and teaching resource devoted to first-person accounts of migration between Southern Appalachia and the industrial Midwest; this effort is being supported in part by the Collaborative for Southern Appalachian Studies.
Thursday, September 22, 2016
7:00 - 8:00 PM
Torian Room in duPont Library