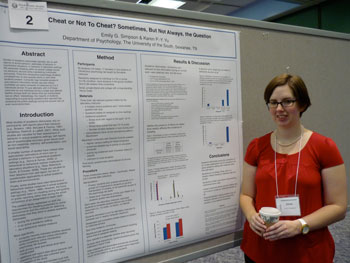 Emily Simpson ’11 and Associate Professor of Psychology Karen Yu presented To Cheat or Not to Cheat?  Sometimes, But Not Always, the Question at the 32nd Annual Conference of the Society for Judgment and Decision Making in Seattle, November 4–7.  The empirical study was largely designed and conducted by Emily during the fall semester of her senior year at Sewanee.

Funding for travel to this conference was provided by the University’s Office of Undergraduate Research, the Psychology Department, and the Dean of the College.

The Society for Judgment and Decision Making is an interdisciplinary academic organization dedicated to the study of normative, descriptive, and prescriptive theories of judgments and decisions.  Its members include psychologists, economists, organizational researchers, decision analysts, and other decision researchers.  The Society’s primary event is its Annual Meeting at which Society members present their research.  It also publishes the journal Judgment and Decision Making.