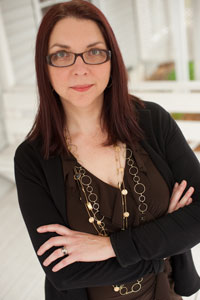 Sherry Hamby, research professor of psychology at Sewanee, last week received the award for Outstanding Contributions to the Science of Trauma Psychology from the Trauma Psychology Division during the 125th meeting of the American Psychological Association. This annual award recognizes distinguished contributions to scientific research on trauma. The award may be given in recognition of a particular discovery or for a sustained body of research and scholarship.

Hamby has worked for more than 20 years on the problem of violence, including front-line crisis intervention and treatment, involvement in grassroots organizations, and research leading to the publication of more than 150 articles and books. Her work on the National Survey for Children’s Exposure to Violence—the largest study of youth victimization ever conducted in the U.S.—is the empirical foundation of the U.S. Department of Justice’s Defending Childhood Initiative. She is the founding editor for the APA journal Psychology of Violence, and has served on three expert panels for the Centers for Disease Control and Prevention.

The ​APA is the leading scientific and professional organization representing psychology in the United States, with more than 115,700 researchers, educators, clinicians, consultants and students as its members.