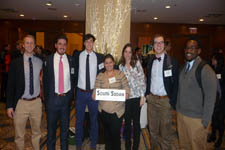 Model United Nations (Model UN) is an international co-curricular activity that enables students to play the role of an assigned country in the UN simulation. During the conference, students debate current issues before the UN General Assembly, the Security Council, and various UN bodies, and they strive to build consensus to pass resolutions. Students must put aside their own personal views on issues to represent their assigned country.

At the 2016 AMUN conference, the Sewanee team represented the newest member of the United Nations—South Sudan. Students debated issues such as the international trade in small arms, the protection of journalists in combat zones, the future of the World Health Organization, and the creation of a nuclear free zone in the Middle East. Before the conference, they completed research, wrote drafted resolutions, and engaged in simulations to practice procedural rules used in the United Nations.‌

Over 1500 students from American and international universities attended the conference, where they acted as representatives for over 130 UN member-states.  Reflecting on the conference as a learning experience, Sewanee students said the experience helped them better appreciate the nuances and difficulties of global cooperation.  Several students said the experience taught them about the necessity of clear communication, inclusion, and “leading from behind” in the diplomatic process.

The American Model UN conference was the culmination of POLS 446 –Political Simulations.  Taught by Dr. Amy Patterson, the class is open to all students.