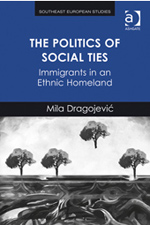 In May 2014, Assistant Professor Mila Dragojevic published a book titled, The Politics of Social Ties: Immigrants in an Ethnic Homeland with Ashgate Press. Drawing on years of fieldwork in her birthplace, the former Yugoslavia, Dragojevic addresses how interpersonal networks and memories of ethnic conflict form the basis for recruitment into nationalist parties. The book promises to make an important contribution to the field's understanding of microprocesses involved in ongoing ethnic conflict and participation in nationalist parties. The book is part of a series on Southeast European Studies.