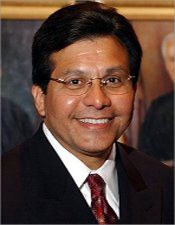 Former U.S. Attorney General Alberto Gonzales will visit campus February 26. From 2005-2007, Gonzales served as head of the Department of Justice under President George W. Bush. His legal career began in Texas where he worked in private practice until he became General Counsel to then-Governor George W. Bush. He later served as Texas Secretary of State and then was named to the Texas Supreme Court. Currently, Gonzales is dean of the Belmont School of Law.

He will meet with Pre-Law students and visit Professor Hatcher’s Presidency course. Gonzales will sign copies of his newly published book, A Conservative and Compassionate Approach to Immigration Reform, at 4 p.m. in Convocation Hall before he gives a public lecture beginning at 4:30 p.m. Students, faculty, and members of the community are invited to attend.