SHPS is a student-run group, overseen by the Office of Medical and Health Programs. It was initiated at the request of Beth Phillips C’91, an ER Physician. The goal of this group is to provide leadership opportunities for pre-med and pre-health students. Additionally, SHPS serves as a support structure for students and as a place to learn about networking and finding health-related internships, jobs, and information about graduate schools (medical, veterinary, nursing, dental, physical therapy, etc.). The group is led by an executive board consisting of a president, vice president, secretary/tutor coordinator, treasurer, and project manager(s) in each of the health disciplines; all are elected annually in April. To join SHPS, contact one of this year's Co-Presidents: Meghan Symonds and Trey Claus. 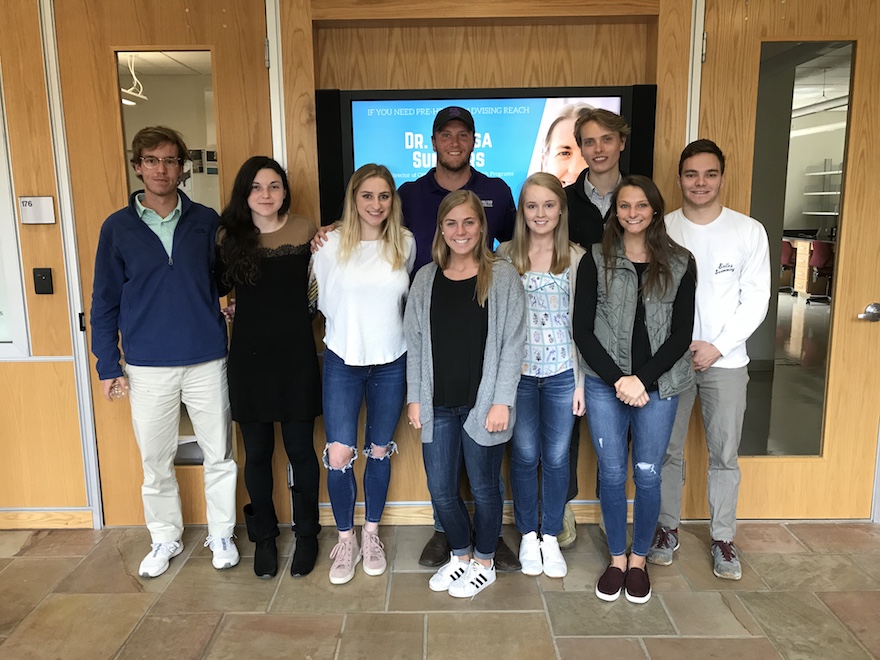 Meghan Symonds – Co-President
Meghan is a senior biology major on the integrative track and an archaeology minor. In addition to being involved with SHPS, she is also a captain and an active member of the Sewanee Women’s Varsity Golf Team. After graduating from Sewanee, Meghan hopes to attend dental school.

Trey Claus – Co-President
Trey is a senior on the pre-medical track, majoring in biology and potentially minoring in chemistry. He strives to involve himself with activities both on campus and off. These activities include: football, tutoring for pre-health courses, working at Sewanee Elementary, and volunteering at Volunteers in Medicine of Southern Tennessee. This past year, Trey wrapped up his final summer as a V-SURE intern at Vanderbilt University, where his research project involved developing novel pharmaceuticals for cancer. After graduating from Sewanee, he plans on attending medical school and pursuing a career in surgery.

Gil Horner – Co-Secretary and Tutor Coordinator
Gil is a junior at Sewanee studying anthropology and biology. As a co-secretary for SHPS, Gil works to ensure smooth communication between the executive council and student body. He also serves as the student liaison for the SHPS-OMHP tutoring program, which offers students one-on-one tutoring with a peer at no cost. Outside of academic spaces Gil enjoys running on the Perimeter Trail, Spring Break outreach trips, and other Sewanee Civic Engagement affairs. Following his short time on the Mountain, Gil plans to attend graduate school to further his anthropological training and receive a degree in human medicine, with the goal of practicing and teaching social medicine.

Jarrod Marable – Co-Secretary
Jarrod is a junior pre-med biochemistry major and religion minor from Marietta, GA. Jarrod is a member of the men's varsity swim team, proctor of Elliott and Hunter Halls, a tutor for the chemistry department and the OMHP, an SMHS member, and the academic chair of his fraternity. Jarrod has shadowed clinicians in a variety of settings. Most recently he shadowed an oral and maxofillial reconstructive and cosmetic surgeon in Atlanta. In the future, Jarrod hopes to pursue a career as an emergency department physician or general surgeon.

Hannah Faulkner – Treasurer
Hannah is a senior biochemistry major and biology minor on a pre-med track. She is one of the captains for Sewanee's cross country team and a member of the track and field team. Hannah is treasurer of the Chemistry Club and co-leads a bible study with Dr. Peters. She is also a member of SMHS, CRU, the Order of the Gown, Alpha Epsilon Delta (national health pre-professional honor society), Alpha Phi Omega (national service fraternity), and Eta Sigma Phi (national classics honor society). While on the Mountain, she conducts psychology research in the CARE (Caregiving, Affect, and Relationship Experiences) Lab. In addition, she has recently joined a cancer research lab under the mentorship of Dr. Alyssa Summers. This past summer, Hannah was one of two interns for Dr. Paul Evans and worked in The Evans Clinic, at the Jackson-Madison County Regional Hospital, and with other specialties in various hospitals and clinics. In the future, Hannah plans to attend medical school.

Grace Donner – Events Coordinator
Grace is a sophomore biology major and Spanish minor. She currently serves as one of the event coordinators for SHPS. Outside of SHPS, Grace is a member of the swimming and diving team, participates in Greek life, and is a member of the Rotaract Club. This past summer Grace took two summer classes, biochemistry and medical humanities, and shadowed at the local hospital in Winchester, TN. While shadowing, Grace shadowed in the ICU unit, emergency room and OB/GYN unit. After Sewanee, Grace plans to attend medical school and aspires to be a pediatrician one day.

Michael Jacobs – Events Coordinator
Michael is a junior biology major and environmental studies minor. He currently serves as one of the events coordinators for SHPS. Outside of SHPS, Michael is a starter on the football team, a biology tutor, Philanthropy chair for Sigma Nu, and a member of Alpha Epsilon Delta. He also does research on whale tissue with Dr. Fielding at the University. Michael volunteers once a week at a volunteer medical clinic in Winchester that provides care for those who cannot afford it. Two summers ago he participated in an ACE Medical internship with a neurosurgeon in Memphis for eight weeks and also went to Iceland to study surge-type glaciers with Dr. Fielding and other students. This past summer, Michael was a part of the Sewanee-At-Yale Program, and he created an atlas of the Macaca Mulatta brain using both functional and anatomical data. After leaving Sewanee, Michael plans to attend medical school.

Natalie Paige Griffin – External Communicator
Natalie Paige is a junior molecular biology major on the pre-med track with a classical languages minor. This summer she was a Cumberland Plateau Medical Clinic intern and worked at surrounding rural area clinics. Outside of her involvement with SHPS, Natalie Paige is a member of SMHS, Sewanee for St. Jude, Sewanee Rotaract Club, Eta Sigma Phi Honorary Society for Classical Studies, and she is an Orientation Leader for the Class of 2022. In the future, Natalie Paige plans to attend medical school and specialize in pediatrics.

Brianne Holsomback – External Communicator
Brianne is a pre-medicine, junior biology major and chemistry minor from Chattanooga, TN. She is a member of the Sewanee varsity swim team. She is also a proctor of Hodgson and Philips Halls. She is one of the 4 first-year Hippocrates Fellows and holds an internship position at Partners for Healing. She is hoping to attend medical school directly after graduating from Sewanee. 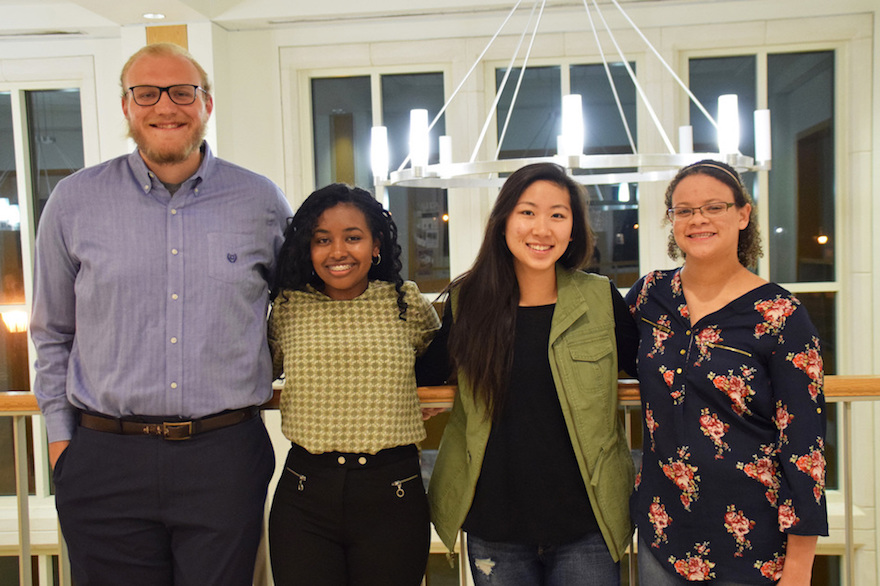 ‌SMHS was established by Cortez Brown C'16 and Fridien Nana Tchoukoua C'17, with founding members Ashley Malpica C'17 and Reeda Shakir C'17 in the spring of 2015.  Working closely with SHPS (Sewanee's Health Profession Society) the Officers of SMHS aim to reduce health disparities through workplace diversity. As an organization, the mission of the Sewanee Multicultural Health Society (SMHS) is to bring together a group of students who are passionate about uplifting multiculturalism and serving in Rural Appalachia. In addition, the purpose of The Sewanee Multicultural Health Society is as follows: 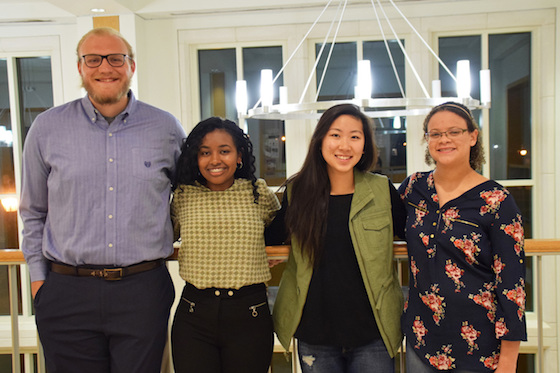 Mesgana Dagnachew is a junior biochemistry major and politics minor on the pre-medical track at the University of the South. At Sewanee, she serves as an educator for the diabetes education fellowship program, conducts an independent research study on air quality and neurodegenerative diseases and writes grants for different nonprofit organizations within the community as a Canale. In addition, Mesgana enjoys singing in the Sewanee Praise gospel choir. After earning her bachelor’s degree, she plans to attend medical school and specialize in pediatrics.

Matthew Hembree is a junior biochemistry major and Spanish minor following the pre-medical track at Sewanee. Through SMHS he served as an educator and executive assistant before becoming Co-President. Matthew spends a majority of his time at different campus events capturing photos for the school newspaper and a variety of other organizations. He is also involved with the school’s club rugby team and enjoys playing guitar in his spare time. In his time away from school, he shadows different physicians and travels when he can. Matthew has an interest in anesthesiology and plans to attend medical school after Sewanee.

Sue-Yun Kim is a senior biology major on the integrative track. She served as an executive assistant for SMHS the prior two years. She has experience shadowing doctors at UTK Hospital and Children's Hospital, along with working with children through various camps each summer. She is very involved in other campus organizations and extracurricular activities such as the Sewanee women's basketball team, SHPS, SWEEC, Student Disciplinary Board, Bacchus, Arcadian's Tour Guide, SADC, SAAC, Orientation leader, and Co-Vice President of BOLT. After Sewanee, she hopes to pursue a career in hospital administration.

Paisley Simmons is a sophomore neuroscience major, potential psychology minor and on the pre-medical track. She has been a member of SMHS for two years, serving on the committee as an educator her freshman year and currently as a part of the executive board, serving as the secretary. Outside of SMHS, she is a member of the swim and dive team (a diver), SHPS, Cru, National Society of Leadership and Success (NSLS), and Sewanee Neurds, and she was an orientation leader this fall. After graduating from Sewanee, Paisley plans to attend medical school and hopes to become a neurosurgeon.