Integrated Program in the Environment 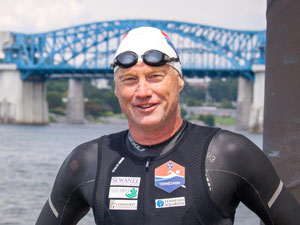 Andreas Fath on the river in Chattanooga

The Tenneswim project is the brainchild of Professor of Geology Martin Knoll, C’82, and Andreas Fath, a professor from the University of Furtwangen in Germany. Fath, the swimmer behind Tenneswim, is almost two-thirds of the way though his 652-mile swim of the Tennessee River, accompanied by Knoll and other scientists as well as two recent Sewanee graduates.

During the month-long adventure, the TenneSwim team is taking water samples for analysis of chemical contaminants and microplastics, and stopping in riverside communities to highlight the importance of water supply and water quality to humans and other organisms.

Fath completed a similar project in 2014, swimming the entire length of the Rhine River while completing a regime of water testing to shine light on water-quality issues. He began his current swim just north of Knoxville in late July, and hopes to reach the destination at the confluence of the Tennessee and Ohio Rivers in late August.

Like the Rhine swim, Tenneswim anticipates drawing public attention to water quality and attracting research funding. Follow-up projects include both academic work by Sewanee faculty and a public-education program anchored by the Tennessee Aquarium.